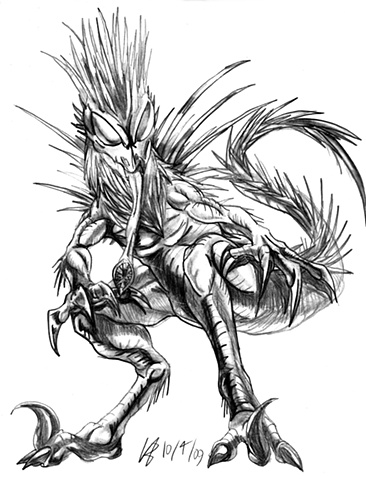 This creature is definitely popular one, the Chupacabra, or "Goat Sucker" in Spanish, is a popular cryptid that I always have fun making.

The chupacabra is a creature reportedly sighted in Texas, Mexico, and Puerto Rico for the supposed slayings of goats, dogs, roosters, and other animals where all the animal's blood is drained and internal organs are removed with only a few puncture marks left on the carcasses. Though descriptions of the creature vary, the most common are a small bipedal creature with huge eyes, a row of spines, and fangs.

For my depiction of the Chupacabra, opposed the idea of the creature resembling an alien with spikes and made it more predatory, by using a raptor body, and I just went nuts on the spikes, making it more like a row of quills and made a very unique feeding utensil with its parasitic tongue and toothed mouth. The fangs I made more as fleshy appendages to give it the appearance of fangs, since a blood and organ sucker isn't too keen on tearing and more for grasping its prey. Enjoy everyone.