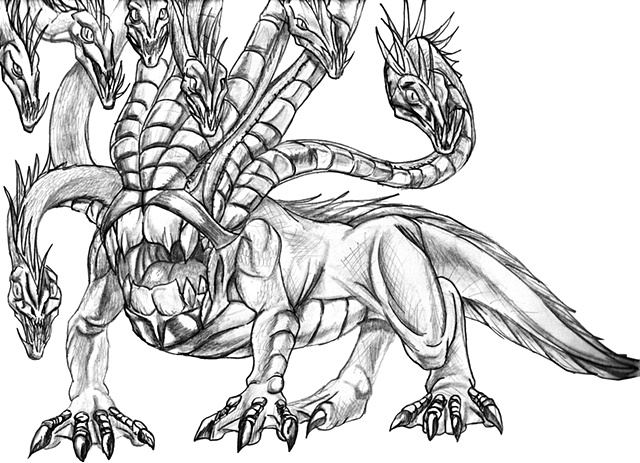 This is another popular mythical creature in Greek Mythology, the Lernaean Hydra, made famous by Hercules Twelve Labors, is a sea serpent said to possess nine heads and was the former guardian of the entrance to the Underworld til its death. The hydra spewed poisonous breath and even its own blood is toxic.Its heads were regenerative, in that if you cut off one, two more spring in its place, with the last head being immortal.

It dwells in the lake of Lerna, where Hercules encounters it. Having trouble in killing the creature, Hercules had his nephew, Iolaus, burn the heads so they wouldn't grow back and bury the immortal head under a rock. Hercules later, used the Hydra's poisonous blood to tip his arrows and become useful in future adventures.

My version of the Hydra used the immortal head as the main body, with accompanying heads sprouting out to serve as its eyes, ears, and mouth and served as a means of attacking, without bringing forth its own head, while adding webbing to its clawed feet and a eel tail. The main head's teeth are modeled after prehistoric fish and given standard serpent heads with encapsulating scales and using a lighter value pencil to add scales.