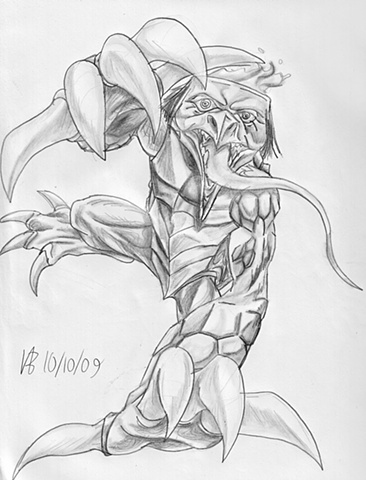 Today's creature is a popular one in Japan, the Kappa. A type of water goblin or river imp that inhabits the rivers and streams of Japan. They are troublemakers that range from mild like passing wind to more serious like kidnapping children, which is the Japanese boogeyman to children, since a Kappa eats children and adults as well. However, cucumbers are also a favorite amongst Kappas.

Though their appearance varies, the most common is turtle like with webbed hands and feet, a protruding beak and finally, the deep impression on the top of their head, which is filled with water and is the source of their power and one of their weaknesses. A Kappa, you see, possesses a strong sense of honor and can not resist returning a bow, even at the cost of its water, since the water in the Kappa's head is their sole means of surviving on land, like Aquaman, without water, they are defenseless and could die. Though fighting a Kappa is actually tricky, since a bone breaking fighting style is rumored to be derived by them, called koppo jutsu, and is possibly where I based my design on the Kappa.

I leaned towards a horrifying turtle creature with a deformed jaw and protruding tongue, while I may make a more benevolent version of the Kappa since I wasn't aware of their benevolent and curious nature of man, more so on the boogeyman aspect of the creature. They are a staple in Japanese culture with kappamaki, a sushi roll with cucumber, to stuffed animals and even modern signs warning of Kappas lurking in the water, to pop culture appearances such as a Kappa in Karas and Hellboy: Sword of the Storms.