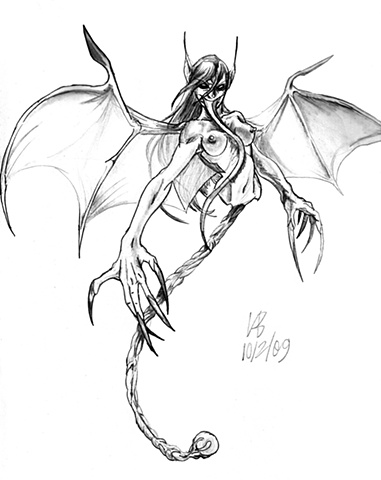 Here is the second of my series of monsters in a month. I decided to draw a creature I'm familiar with, especially since its a monster appearing in my upcoming graphic novel. As well as present a counterpoint to the widespread idea of the "wussification" of vampires. T

he problem being with most vampire ideas; is the pervading ideas of the European Vampire mythos used as canon, when in truth, Vampires actually have their origins in Asia and with it, a whole plethora of new vampires even more hardcore and disturbing than the ones we are familiar with.

With that, I present the vampire of the Phillipines, the Mannanagal. I chose to go with this name, though truth be told, the creature goes by a great deal of names and are interchangeable with other monsters of the Phillipines, such as the Aswang. Moving on, the Manananggal is a by all accounts, a vampire. Usually female, they hunt at night by sprouting batlike (or birdlike) wings and separating themselves from their lower half to go hunting for pregnant women and drinks the blood of their fetuses through their long, proboscis tongue.It will also feed on mucus.The bizarreness of this vampire doesn't end with its ability to separate, but in that the source of their power comes from a black baby chicken dwelling within their throat or stomache that the Manananggal feeds. I order to kill a Manananggal, you either find the base of its body and sprinkle crushed garlic or ash to prevent the halves from merging, or you expell the chick from the Manananggal's body. Also, a Manananggal can create another by either passing on its chick or having a person consume the flesh or saliva of a Manananggal.

When drawing the creature, I felt making the Manananggal like a feral insect by giving her the batlike wings, mothlike tongue, wide black eyes and long ears and eyebrows. I also kept the woman idea as it works well and is a good excuse to draw a nude character. I chose to have the intestine trail as a nice tether for its body as well as add an even more visceral quality to the creature.