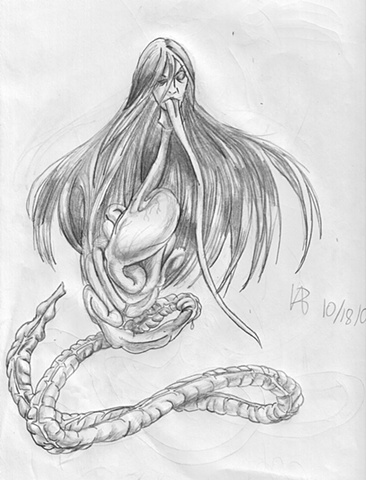 I missed a day yesterday, since I've been out all day, with barely a chance to draw a new creature, but I'll make it up by double posting two drawings to make up for it.

Now, we have another vampire from Malaysia called the Pennangal, or Pennangalan, a vampire that hunts like the Mannanangal by separating themselves from their body, except the Pennangal severs itself from the head,with its stomache and intestines still attached, hence its name literally means : to detach". The creatures intestines actually shimmer in the night, to give the illusion of fireflies, but is not considered undead, due to a Pennangal coming into being by black magic.

By day; normal as anyone else, but at night, the slithering, flying mass of entrails and horror. Usually a woman, the Pennangal hunts after pregnant women and young children, sucking the blood from its victims with its immense tongue, often infecting them with a fatal disease. Even its entrails, dripping with venom, will leave a series of open sores upon physical contact that will remain unless a mystic can cure them. They are also said to be able to slip through the tiniest of cracks , able to ooze itself into materialization,and use their intestines like tentacles.

One way to detect a Pennangal is by its smell of vinegar, since the Pennangal needs to bathe in vinegar to shrink its entrails back to size for reinsertion.To counter the Pennangal, people will hang a thorny plant called the Mengkuang, or plant pineapples to ward off the Pennangal. Or if you find its body, you cremate it before sunrise.