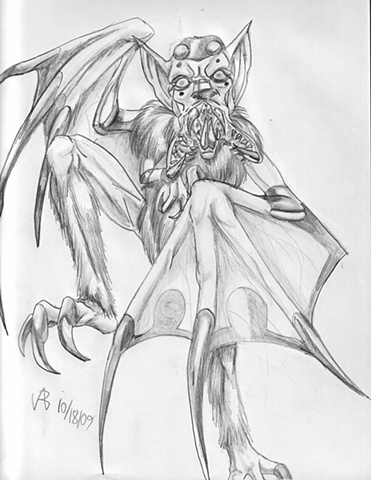 The second of my makeup work, the Sasabonsam, closely affiliated with Asasabonsam, since both are vampiric hunters that hunt in the treetops, except that Sasabonsam resembles a giant bat with long legs, black markings, and is very hairy. It has origins in the Ashanti language and is said to dwell in the forests of Southern Ghana, and also the Ivory Coast and Togo. It is often described as a short man with a wingspan of 20 feet and like the Asasabonsam, has iron teeth for drinking blood. Strangely enough, there are two stories of where the creature was found with a hunter claiming to have killed it and one explorer who supposedly photographed it in 1928 while in the Congo.

"A young man present in the crowd observing the sculpture told Danquah that once he had actually seen a Sasabonsam, which had been killed by a man named Agya Wuo. He gave Danquah several details of his sighting. The creature had been a little over 5 feet tall, with a wingspan of almost 20 feet. Its teeth and arms were quite long, it was spotted black and white, and it had scaly ridges over the eyes. Agya Wuo said he had found it sleeping in a tree, and that it made a somewhat bat-like cry. The body had been taken to the home of the District Commissioner, L.W. Wood, who on February 22, 1928, photographed the carcass.

Danquah contacted Wood later, but Wood was not sure if he had, indeed, taken the photograph. He said that he was in Ashanti in February, 1918, but not 1928."

For my drawing of this creature, I stuck with the bat- like creature, but I gave him vestigial arms for airborne snatching, and I incorporated the markings and small bumps from sighting claims. I originally was going for a standard bat mouth, but I looked at a Marquis inspired creature sketch and a flashback from the vampires from Blade 2, and I went with that mouth design.