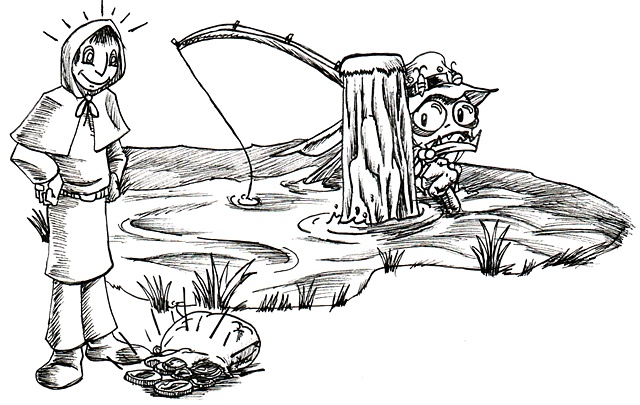 The Merfolk Fisherman is the sports enthusiast of the Merfolk community. They go up to the surface and game fish the local human population, with lures of gold, treasure, some even using LiveDolls to fool a slow-witted and foolish human who gets suckered into their bait. The Merfolk Fisherman then snares their quarry, photographs it, and depending on the role, either releases it back into the wild, or takes it home to be made into food and a trophy to mount their decorative coral walls.

This one was a challenge in that I struggled to figure out an approach to the idea that translates well and won't overtake the layout of the card space. I drew it vertically, in having it wait underwater to fool someone, but then I just drew it horizontally, to show it waiting on the surface, hiding in anticipation at the poor villager falling for the lure of a coin purse left near the shoreline. this was more than enough to convey the message and it met the card layout specs.