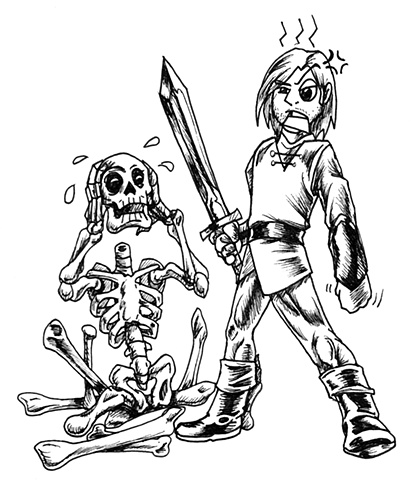 Really Obnoxious Skeleton. Card Artwork. Monster Type: An enemy who will delay your missions... by regenerating and crying about it throughout each battle.

The Really Obnoxious Skeleton is an enemy that will pity, and will want to be rid of after the first 15 attempts to defeat it. It is a monster cursed to reassemble itself after every defeat, but made more annoying as it whines and cries about each and every time. Nothing you can do will silence it. From shooting it with the AK-47 Assault Bow, Smashing it with the IMace, to torching it with the Flame Armor; it will always come back, more sadder and whinier than before. Adventurers Tip: If you encounter the Really Obnoxious Skeleton; trash it a couple of times, then leave it with the one member of your party in Full Gothic Metal Plate Mail and just keep going.

My friend was uncertain in how this would be portrayed, as his instruction for it was a skeleton assembling its leg. I initially had planned to have it be a companion on your back that just won't shut up, but my friend wasn't keen on that. So I made it reassemble, with tears flowing out, as an adventurer, who is not Aragorn, looks on in disgust and annoyance at having to fight it again.