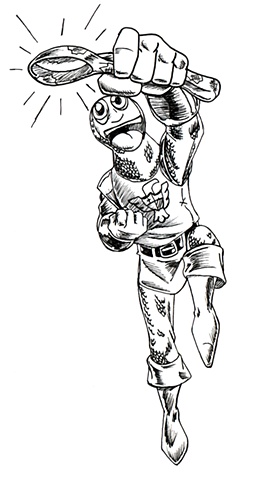 The Rusty Spoon is the latest achievement i dining technology. It is a utensil that scoops up food, whether it is solid or liquid. The rust on it is merely the seasonings to enhance the flavor of your meals.

One of the early card ideas pitched to me. My friend originally thought it was going to be a simple metal spoon, but I added this excited character raising it in triumph, like it was the greatest thing ever, that we kept that idea into the artwork. I think I was channeling recent Legend of Zelda games when Link finds an item and raises his hands in triumph as the item floats above his hands ,telling you what it is you've obtained.