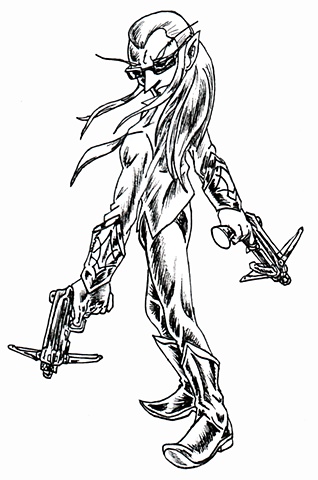 The Semi-Automatic Crossbows is the perfect weapon in taking down multiple opponents while looking badass in the process. So useful and lightweight that its possible to wield two at the same time, an unprecedented first in the fantasy realm!

When this was brought up to me, I immediately flashed back to a game of Munchkin (perfect for genre mash up ideas I might add) with my friends, who during the game, one of them became an Elven Yakuza, which is the first beings I felt would best wield such weapons, Elves for their natural affinity to archery, and the Yakuza from all those Japanese Yakuza films, or Chow Yun Fat's dual wielding self in Hard-Boiled. Add the stylish flair in handling both weapons ,and you got your Elven Yakuza ready to take down orcs in slow motion while doves fly out in the foreground.