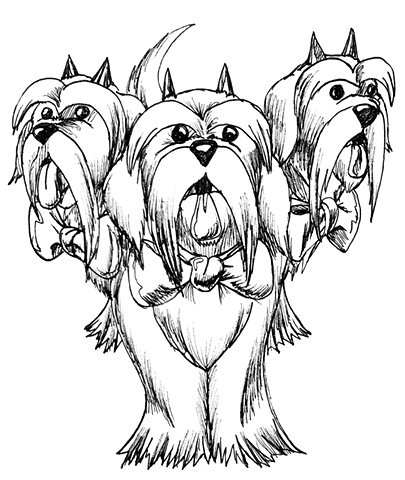 Three- Headed Hell Shih Tzu. Card Artwork. Monster Type: He guards the Gates to the UnderWorld... and he looks ADORABLE!

A guard dog to many underworlds on the wealthy side of kingdoms, comes the fierce hound; the Three-Headed Hell Shih Tzu. This fluffy, multi-headed, beast is capable of gnawing at ones boots while making sweet,sweet love to your hind leg. Also, it breathes fire. Yeah, didn't mention that in Dog Fancy or even in your Monster Manual, now, does it? This dog belches fire and poops out flaming coals. Also, it pisses sulfur, so yeah, those high class types have a very high maintenance pet on their hands. But one look into its dark, abysmal, eyes and every owner will just snuggle this fur ball as its three tongues lick with approval.

I originally planned to mock it, but I wrote it as way more bad ass than it it has any right to be. I honestly had to look up what Shih Tzu looked like, even checking the spelling. I drew this, yet my sister said its the wrong dog and looks more like a Scottish Terrier. I said to her," We'll just call it a Three- Headed Hell Terrier and be done with it, I have no plans to redraw this dog."

Yup, I put my foot done on that one for a petty reason.