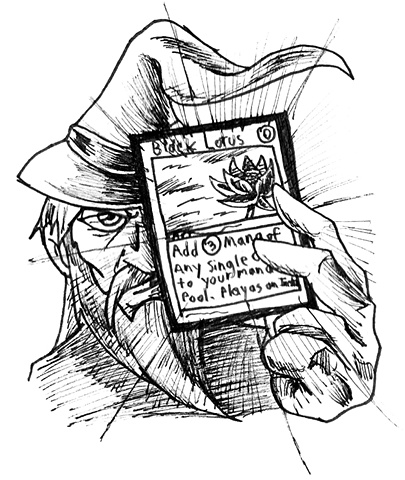 The Truly Mystical Spell is one of extreme value. Thousands upon thousands of mages scour the lands, looking to procure the rarest and most powerful spells to place in their dec-, I mean, grimoires. These spells are randomly assorted and must be purchased from specialty vendors, however, the rarest of the rare of spells have to be bought or discovered after years of treacherous searches and raids, will thoust procure the true art of Fireball? Or cast down the Lightning Bolt? Or get the one unobtainable mana fix, The Black Lotus? This mystical art was made by the Sacred Wizards Council of the Coast and is available for practicing wizards everywhere.

Yup, its a Magic card. This was actually based after a comic strip from the website Let's Be Friends Again, with Doctor Strange pulling out the Black Lotus Magic Card on Dormammu. Link to the comic is here;

I liked the gag, but used a pseudo Gandalf to play the card, as well as shift the pose. This is because I draw these pictures in groups on one sheet, so sometimes I have to draw them at weird angles. I also wanted to give credit and a plug to the creators of said strip so that they can gain in a little more internet fame.