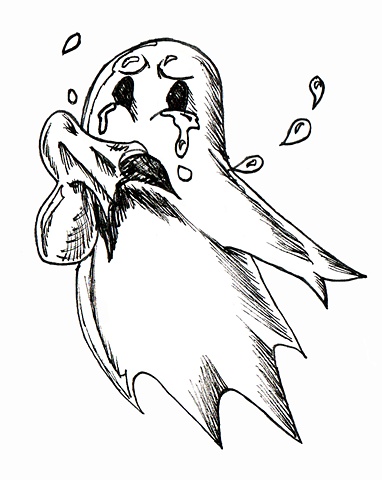 Whiny Ghost. Card Artwork. Monster Class: Even in the afterlife; there are emos.

Not all ghosts are terrifying. Some are friendly, some are funny to look at, and some are such an insufferable pain that re-re-death isn't good enough to get rid of the Whiny Ghost. A haunter who cries and bellows over every little thing that attempts to put it out of its misery have only resulted in it crying over how its afterlife is just as lifeless as he is. Many a traveler has opted to throw thyself over the cliffs or run themselves through than to go for another minute of listening to the Whiny Ghost.

This is a simple drawing of a crying ghost, whose spectral tears float away and uses its own hand as a hanky.