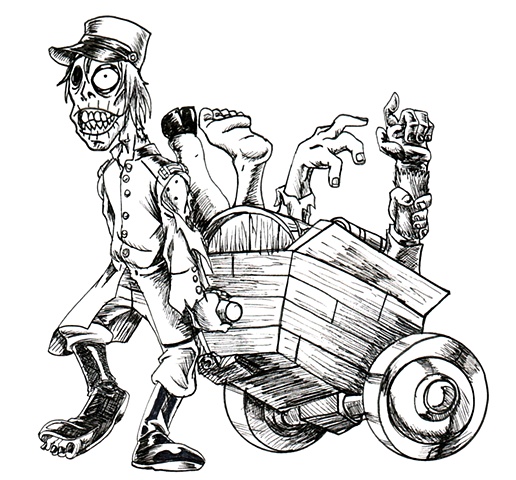 The Zombie Quartermaster is the Supply Runner for the Undead legions. Don't let its clothing and the fact that it serves a purpose fool you; he/she is still a zombie. So, don't expect them to replace your current living Quartermasters in regards to cargo shipments. Plus, you may not like what cargo it be carrying.

This one I had to not only ask, but look up what job a Quartermaster is. Though tempting to make a naval zombie, the Civil war style zombie worked better and originally, I drew it with a fat belly near a supply tent, then I just drew it, shambling with a wagon full of goods and severed limbs, with one hand holding a Monkey's Paw. My joke in that a person made a few wishes in preparation for his next wish; a zombie apocalypse, but didn't make out as well as he envisioned. That's my jab at every person who thinks they will make it in a zombie apocalypse or even entertaining the idea of one.