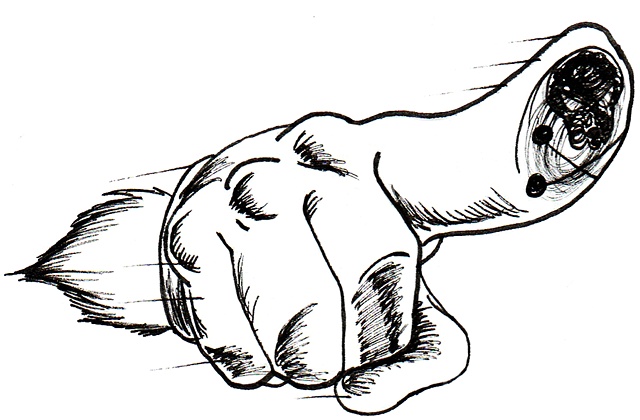 Fingerpoke Of Doom
< previous next >

The Finger Poke of Doom is a powerful magic spell, where you cast a Giant Hand that seeks out and destroys a target with one poke. Effective against Giants, wrestlers, and Blue Meanies.

The Finger Poke of Doom is a reference to an infamous moment in WCW wrestling history, when the New World Order was the dominant force in the company. It splintered off into two factions, NWO Hollywood and NWO Wolfpac and the story was Nash, leader of Wolfpac, felt guilty over his World Title win against Goldberg (Hall came and tazed Goldberg, giving Nash the win) that he offered him a rematch on Nitro. However, Goldberg was arrested on accusations of stalking from Miss Elizabeth, so Hulk Hogan, leader of Hollywood and supposedly retired from active wrestler, was offered the match by Nash in Goldberg's place. So, on Jan. 4, 1999, on Monday Nitro, for the WCW World Title, we had tow leaders of rival factions, Nash and Hogan, in action. And with one finger poke by Hogan, Nash fell like he was struck by a cannon and Hogan [inned him for the win and the title, reuniting the NWO and as many people speculate, save for the ones involved, the beginning of the end for WCW as a company. This was a moment that insulted and infuriated fans, which caused a lot of people to tune out of Nitro and watch Raw, as that was also the day Mick Foley, known as Mankind, captured the WWF title, which was read on Nitro as Raw was a taped show back then, which resulted in Raw beating Nitro for the first time in the Monday Night Wars.

So, with all that said, I have immortalized that infamous moment as an item card for the game.