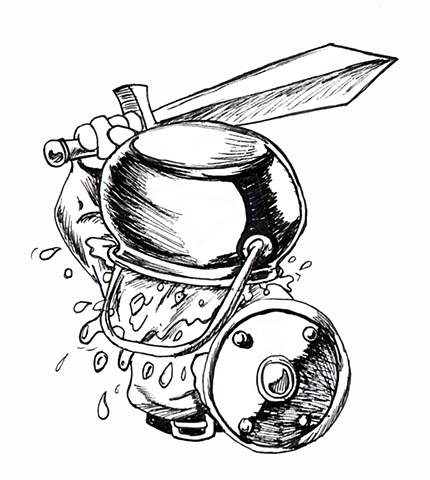 Helm of Courage
< previous next >

The Helm of Courage, a weapon that only the Bravest of the brave may dare wear. An item that challenges all your sense, and in some cases, you gag reflex.

This was one on the last that accompanying the title, gave the description " Its just a bucket". Originally, I did draw it as a bucket over the head of a character, but as went about inking it, I change the bucket into a cauldron or chamber pot, as both share a similar shape. I also added as a last touch, an unknown substance flowing out of the bucket, implying it is a makeshift helmet that the adventure just threw their stew pot on their head... while cooking stew, or a chamber pot with its "contents" still in the pot.