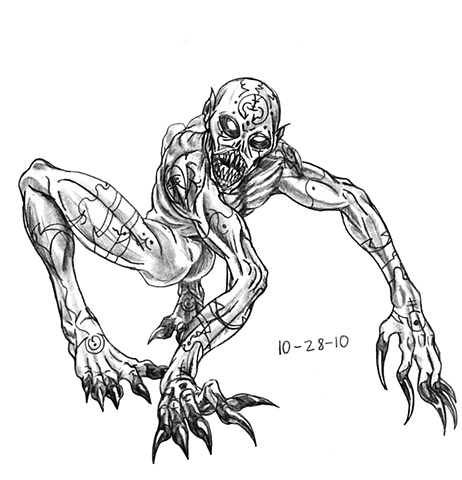 A shape-shifting ghoul from Filipino folklore, the Aswang is a vampiric creature that is feared throughout the Philippines. It is often lumped together with the manananggal, witch, were-beings, and shape-shifters, but is different from region to region.

Though it shares characteristics with the Manananggal (like bat wings, Proboscis feeding means, and posing as human during the day), it is however more akin to a creature called the Bal-bal, a corpse eater (i.e. ghoul) that swaps out the bodies of its prey with a facsimile made out of banana tree trunks.

The aswang is a shape-shifter that blends in with humans during the day, often working in a meat-related field, like butcher. They are shy and elusive by day, but at night, the go about seeking out wakes to eat corpses and replace the bodies with facsimiles, or for pregnant women to suck out the fetuses, preferably the liver and heart. They are also capable of transforming into dogs, birds, cats, and pigs, with the dog being its favorite form. Their ability to make cadaver facsimiles are also capable of making the facsimile animate and have it return home, only to die within a week from illness, so with shape-shifting and creating homunculi (artificial humans) the aswang is a mystical being. They can be spotted by two tell-tale sign, its bloodshot eyes, which are a result of its night time hunting and when looking into an aswang's eyes, your reflection will appear to be upside down. They have another method, but it seems impractical, as it involves seeing them with your head between your legs.

The aswang can be detected via a special oil made from boiled coconut and special plants while prayers are uttered. This oil boils when an aswang is present and continues until it leaves. The stingray tail is said to be an effective weapon, as well as salt, silver(Western influence) ginger, images of old ladies, and semen ( this works on another type of aswang) and garlic.

To make my version of the aswang, I made it as a traditional ghoul, with a twist. Somewhere, I read that its legs are backward pointing, so I took it to another extreme by making all of its limbs inverted. Originally, I drew the aswang as having its fingernails raised out og its digits, but instead settled for tearing claws. Add in tribal markings, and you have a pretty frightening corpse eater.