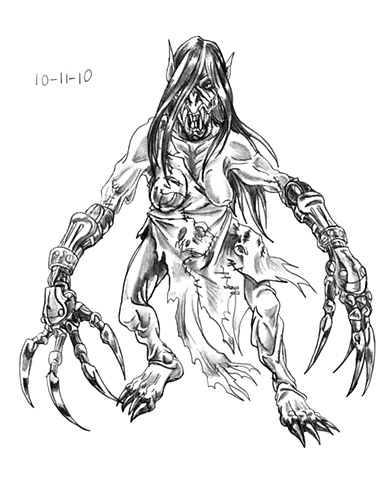 A Boogeyman, or woman from English folklore; Black Annis haunts the area of Leicestershire, in the caves of the Dane Hills. She is a an eater of children and sheep, who flays her victims alive before feasting on their flesh. She then tans the skins of her victims, hanging them to dry amongst the tree branches before using them as her own wardrobe. She is described often appearing as an old crone or witch, with a single eye and iron claws to rend children asunder. She will also go into people's houses at night to snatch children away should they misbehave.

The origins of the myth have one of several possible roots; One, Based on Celtic mythology regarding the goddess Danu or of Germanic Mythology. Two, An 18th century title deed called "Black Anny's Bower Close". Three, Ealry European mother- goddess idelogy as it pertains to child sacrifices.Or Four, Based on a real person called Agnes Scott, who was a late medieval anchoress or a Dominican nun to a leper colony, whose memory was distorted based on scaring children or anti-anchorite sentiment during the Protestant Reformation.

My version of Black Annis, or Agnes as some areas call her, is given a bit of the mechanical in her iron clawed hands with a hint of retractable arms as she is dressed in the skins of her victims. I also drew her to have pronounced and bared fangs as she is often said to have catlike fangs and scarring across a portion of her face to give the idea of her one eye. My final feature was the sharp toenails due to her description of using her iron claws to tear apart sandstone to live within the sandstone cliffs, often caled "Black Annis's Bower, so the claws are to act as a secondary grip to her primary rending tools, her hands.