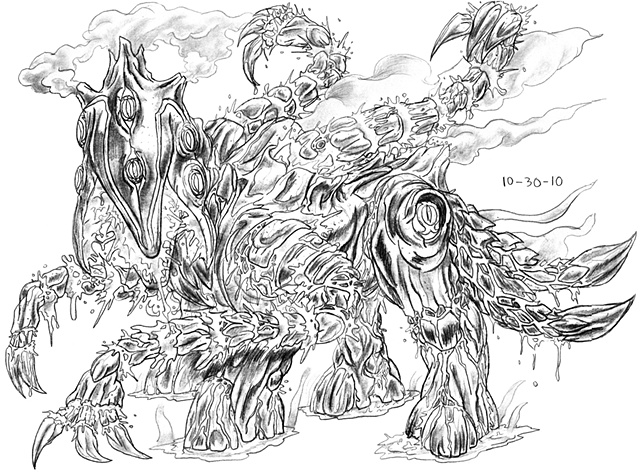 This one was a doozy, as it has an ton of detail. The Cherufe is a flesh-eating creature, either humanoid or repitilian shaped and composed of molten rock and magma form Mapuche mythology, native of Chile. It is said to be the cause of earthquakes and volcanic eruptions as it dwells deep within Chilean volcanoes. It is said the Cherufe is the source of mystical ardent stones which harm volcanoes.

Stories of the Cherufe claim that to appease it, the locals must offer a virgin sacrifice to sate it. after eatiing said victims, the creature would ignite the heads of its meal and launch them out of its home as a sick game to amuse itself.

In South American mythology, the Cherufe's rampage was stopped when the daughters of the sun god froze it with swords capable of sealing the creature.

When designing the Cherufe, I ran with the creature made of lava and rock, except I gave it a more ambiguous form. I gave it volcanoes so that it can grow and build upon itself from the ever- flowing lava sprouting from itself. I also used the volcanic stacks to sprout out lava tentacle arms and a head that opens up like a violent, searing flower. The numerous designs are artificial eyes that when I first drew it, were merely patterns. I evolved the idea and made them eyes. There may be some clipping as I tried to add multiple images over the picture to fit all of it in one go. This one is actually one of my faves as it was an early picture I made when I started going into drawing monsters and it was fun, especially drawing upon influences such as Guy Davis and Cthulu. I wanted it to be a creature that feels like a world ender, and that is what I wanted for the Cherufe.