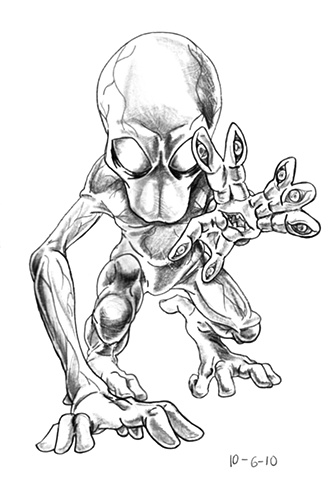 The Dover Demon is a cryptid described as having no visible facial features, large eyes, multi-fingered hands, long limbs, squat body, and a large head. The creature was reportedly sighted three times in Dover, Massachusetts in 1977. It has been spotted mostly by teenagers, some who swear to god they have seen it and often near rivers and rapids. Coloring varies between green or orange eyes to pale gray or flesh toned skin, but the essential feature s stayed the same.

It has been a subject of interest to cryptologists searching for it, while most dismiss it as a prank done by the teenage witnesses. Speculations on its identity range on these prevalent ideas: - An alien (Gray, based on description) - An interdimensional entity - A science experiment that broke free - A newborn moose - A Mannegishi, a race of Trickster people of Cree Indian mythology that reside near rivers - A Backoo, a spirit of Caribbean descent with similar features, or - A hoax, on the basis that sightings were all teenagers.

While this is still under debate, my version of the Dover Demon plays on its ganky features and enlarged head, while employing the many digits it bears on its hands and feet. This feature is called having polydactyl digits, i.e., multiple fingers and/or toes. I also play the horror card by giving it a more veiny appearance, given its gaunt look and adding another set of sensory eyes on its fingers and a mouth within its palms. This echoes the Pale Man from Pan's Labyrinth and Deidara from Naruto:Shippuden with these bizarre physical features. I do love the ominous look in its eyes as its hand reaches out towards the viewer. It is simply chilling.