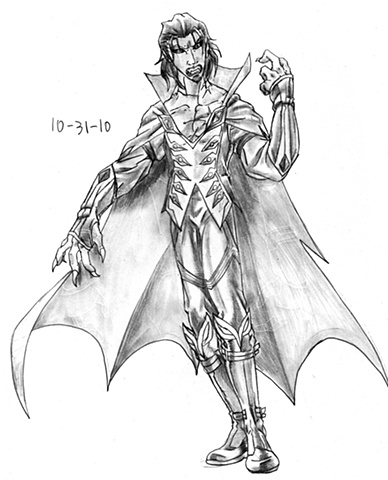 Happy Halloween everybody. The final drawing is a bit of a slack, as I am incredibly tired from work, so I didn't do this until the last minute and after watching the premiere of the Walking Dead. But, enough about my day, let me introduce you to the legendary vampire, Dracula.

Dracula is within a class of supernatural beings called vampires, undead beings that feast on the blood of the living. As I have done in my series of drawings, there are many types of vampires in different regions. In fact, vampires, or blood sucking creatures exist in ancient Persian art thousands of years ago. With Dracula, we are facing the traditional European vampire, which is an amalgamation of various European influences.

When Bram Stoker was writing Dracula, he combined stories of European vampires and of two famous historical beings, Vlad Tepes and Elizabeth Bathory. Vlad Tepes goes without saying, as he is well known as Vlad the Impaler for his method of torture, as well as the title of Dracula; Son of the Dragon. Elizabeth Bathory is known for allegedly killing village girls and using their blood as bath water, for she believed it made her younger.

The vampire is a symbol of power as well, in recent and past times, a form of sexuality, with blood as a metaphor for fluid exchange, eternal youth ,the eroticism of the embrace, and some depictions have show them as relentless hunters, like Nosferatu and 30 Days of Night. Dracula is not the first vampire, but he is indeed the most famous character in fiction.

In my depiction of Dracula, I wanted to combine aspects of an aristocrat and signs of a violent hunter. I used Stark from Bleach as a reference for his face, as well as his released state outfit, but modded it for a vampiric hunter. His cape, traditional, but slightly serrated to resemble a bat's wing. I also used the outfit designs from Blackest night for the patterning. Making his chest slightly exposed is for that sexuality, reverse in this case, and his pride in daring someone to attack him. The scars are a display of a hidden warrior, as he was based on Vlad Tepes, who is a national hero for defending against the Turks. I feel that this is a cheat as I didn't put as much effort in shading and cleaning him as the others, but I will do so in the future. I did like how the overall look of him came and most of the elements seem to gel well together. Other than that, Happy Halloween and Happy All Soul's Day!