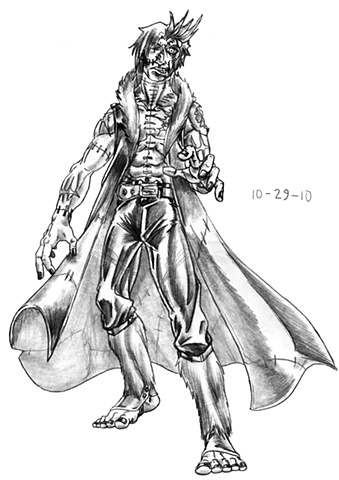 For my final three to end this month long challenge, I will make versions of the classic Universal monster types that we know and love. The first of these is from the classic horror story, Mary Shelley's Frankenstein.

A summary, through a combination of science and alchemy, Dr. Victor Frankenstein created his "monster" from a culmination of body parts and electricity. Repulsed by his creation, the doctor fled. The creature, despite classic depictions, is an incredibly intelligent and tragic creature. One who has tried to find acceptance, and upon rejection, became a monster against humanity and a blight upon his creator, killing everyone close to his "master". But, the creature's humanity becomes apparent, when Victor Frankenstein, upon dying of pneumonia, he comes to deliver vengeance and instead, mourns the death of the only link he ever had to a "family". This ends in the creature traveling far in exile, with the intent on burning himself, the first and last of his kind.

This creature has served as a cautionary tale on science left unchecked, and is still referenced to this day, as science becomes more advanced and the concept of artificial life inches ever closer.

In my version of the monster, I ditched the classic ideas of it being gawky and stiff, for in the book, the monster was incredibly strong and faster than normal humans, so a thinner and more fit frame was my base for it. I played around with the stitches and stapling around its body to reflect its sewn together look, and that was one that I played around with quite a bit. The hair is actually a combination of two different hairstyles from different animes. One was Falcnor, from the Escaflowne move and the other was from a character I saw in anime with two different eyes, and this pronounced spiking in the front. I don't know the name of the series, save that it dealt with alien invasion and that a chunk of the characters shoulder was missing, which I'v added to him as well. I also added the scars and the deformed mouth to complete the look. At first, when I drew this version, it looked too attractive, and altered the lips and the eyes to give it that ugly charm to it.

For clothing, I gave him leather pants, spats with a fur wrap, and the stitched robe with a fur collar to complete the look. Overall, this is a character I like to use for a later story idea, but its basis and source came from the literary story, as well as making a better version than the stinker that was from the Van Helsing movie, so that made me proud of my "Creation".