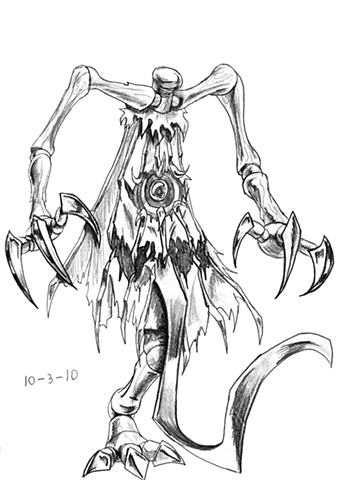 After the accomplishing the 24 Hour Comic Day, I took a long rest for both me and my arm, which cramped up terribly after the event.

Now that I'm rested, I still have my drawing challenge to work on, and to give my hand a break, I went with something a little easy. This creature is from Japanese folklore, one amongst a veritable cornucopia of monsters and spirits called the Kasa-Obake, the spirit umbrella.

The Kasa-Obake are a form of spirit that originates from objects and items, and become animate and self aware after an object reaches an age of 100 years. It is belief that all objects can become what is classified as Tsukumogami, the spirit within the object.

The Kasa-Obake is typically described as an ancient umbrella with a cyclopean eye, a long protruding tongue and hopping on one foot, usually with a sandal.

In drawing the Kasa-Obake, I just drew what is a pretty capable source of making horrifying, since it becomes animate once an object reaches its 100th year, so giving it a torn and tattered appearance and using its hand to morph into wooden limbs and bits of metal for claws. I used the tears to make it openings for the eyes and mouth, while using the frame as teeth and eyelashes, and giving it a ribbon tongue to complete the look. Last, I added arms that sprout out of the top of the umbrella for a scary marionette.