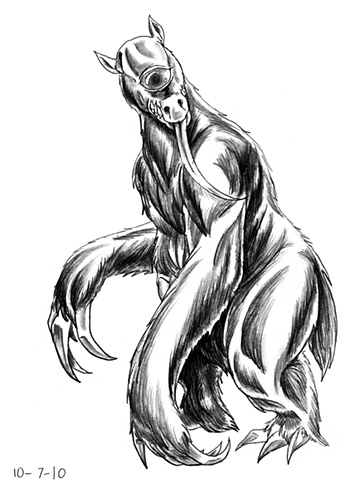 A creature of Brazilian folklore that is a large, red furred slothlike creature, with varying descriptions. It is often described as a giant sloth with a cyclopian eye, caiman skin, long claws, backward feet and a second mouth on its belly. Like I said, no two descriptions are alike. It is described as a slow, but ferocious creature and capable of alternating between all fours and standing upright when moving or sensing humans.It is also called the Ishnashi.

Legend has it, that the Mapinguari is feared because of its ability to move about the Brazilian rainforests thick vegetation without making a sound, but will avoid bodies of water, therebye making its territory limited with the vast number of rivers, brooklets, and lagoons throughout Brazil.

Many cryptozoologists dismiss the creature as a myth or a relic from a long-extinct prehistoric giant sloth called Mylodon. Some believe it is said prehistoric sloth and one researcher, David Oren, has dedicated his life to proving its existence as a rare species of animal.

My depiction of the Mapinguari follows suit of the giant sloth as its basis, with the cyclops eye and a subtle hint of the second belly mouth. I initially had the belly mouth pronounced, but it made it look like a children's cartoon mascot, so I went with a more slothlike look, followed by its long tongue and claws. That concludes my design for the Mapinguari.