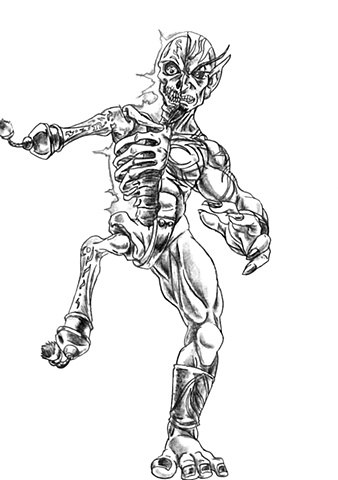 Introducing the Nasnas, not to be confused with a rapper pronounced via stutter. It is a demonic creature from Arabic mythology that is described as a half-man, literally. It has half a body, one arm, one leg, and hops with great agility. It is believed to be a half-demon, half human offspring from a demon called a Shikk. A person can also be turned into a Nasnas via magical means.

In my design of the creature, I experimented with the half motif, settling on the typical form, but giving it an exposed skeleton with vestigial skeletal limbs encased in a mystical field. I gave the human-demon half a djinn appearance with psuedo- Arabic symbols and ornament the being with tassels on its limbs and bands around the shins and wrists. I'm actually pleased with it because of the time it took on the the skeleton, as I originally wanted to add organs inside, but left them out in favor of the exposed skeleton.