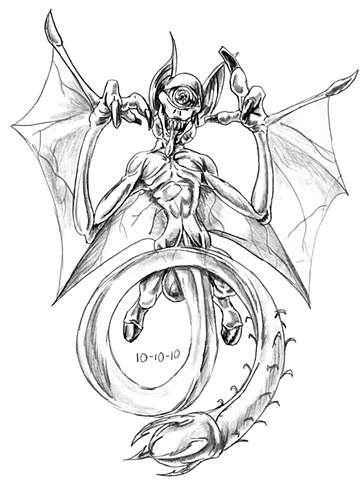 WARNING: THE FOLLOWING PICTURE SHOWS GRAPHIC DEPICTION OF MALE GENITALIA. FEEL FREE TO LOOK AWAY..... ITS OK, I'LL WAIT....... STILL HERE, OK ON WITH THE PICTURE.

The Popobawa is an evil spirit or shetani that resides in Pemba, an island off of Tanzania. It was responsible for a massive hysteria outbreak in 1995 throughout the East African Coast.

The Popobawa is a shapeshifter that is capable of turning invisible and its presence is noticed by a pungent odor. It is capable of poltergeist behavior, but is most famous for its sexual assaults on people, particularly men. It would, as the word puts it, sodomize its victim for an hour, then threatens them with future visits and much worse and longer periods of buggering if the victim (usually male) tells the people of the village that they were attacked by the Popobawa. So a demon rapist with narcissistic tendencies. The creature is a recent creation, as a story recalling its origin is that of a djinn released by an angry sheikh who lost control of it in the 1970s. So state it attacks during election years as well as an outbreak in 2007 of Popobawa attacks.

Which brings me to my creation. So of course, the emphasis is its elongated genitalia, which I have included the barbs and hooks to make it not a comfortable sodomizing. I stuck with its famous depiction as a cyclopean bat creature, but I added swirls in its eyes, a throat pouch, and enlarged testes. Made the claws blunted as I focused on its primary weapon, which is its torture dong (patent that). So that is my drawing of the Popobawa. Enjoy and know that what can be seen can never be unseen.