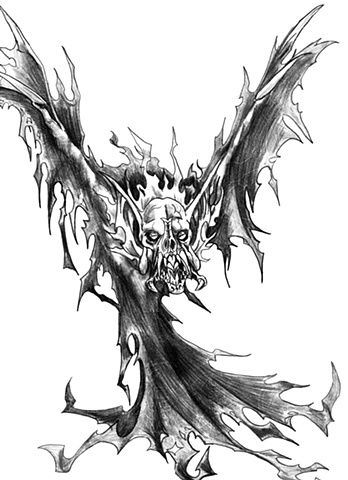 Based on Romanian folklore, but is interchangeable and I spun it with my own mythos into it, as I was inspired to do this creature from a Hellboy comic. Initially, it was called the Varcolac, a vampire so great that it is capable of swallowing the sun and the moon, but the term denotes a wolf demon or were-wizard, so I did some searching and found the term for a vampire in Romania, called the Strigoi.

The Strigoi are the reanimated corpses of troubled souls that usually share traits described in vampires, such as shape-shifting and blood drinking. Though physically, they are described as having red hair, blue eyes, and two hearts, like a certain Doctor (the two hearts I mean). Interesting though, the Strigoi is capable of passing itself of as human and can have children, albeit they, too, will become vampires.

Now for my version of the Strigoi, I took some cues from the gashadokuro, The Menos Grandes from Bleach, and some of my playing around with different vampires to create the version seen here. I like the idea of a towering monster capable of consuming celestial bodies, but kept to consuming humans. So, I made the Strigoi a giant vampiric bat, created vial ritual magics across the mass graves of vampires, making the Strigoi the combined souls of vampiric spirits into one massive, life-draining creature. I gave it mandibles, as I'm a fan of a bat creature with mandibles and made it with batlike features, such as the head and wings, but still have the qualities of a ghostly apparition with the free form body and wisps.