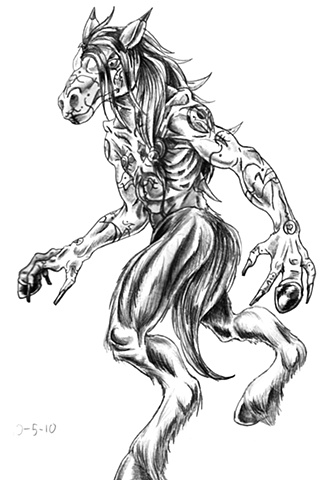 This creature is from Filipino mythology called the Tikbalang, a half-human, half-horse creature with legs said to be so long that when it sits, its knees meet its head. This creature resides in the forest and mountains, or under bridges and banana groves. The Tikbalang is characterized as being tricksters, who scare or lead travelers astray to the point of insanity; as benevolent guardians of nature who protect their homeland, or as horrid creatures with glowing red eyes who torture travelers, stomps offenders to death, and raping young women.

Some legends describe ways of dealing with a Tikbalang, like travelers can either call out for permission to pass through its kingdom, make very little noise, or to turn one's shirt inside out. Another method is considered "taming" the Tikbalang by grasping one of its three thickest spines of hair (one account describes their hair as a thicket of spiny hairs) to make an anting-anting (talisman) that binds the Tikbalang to servitude. But, in order for the talisman to take effect, the Tikbalang must be subdued by essentially jumping it and holding on for dear life as the Tikbalang fights wildly to dislodge the individual, until the Tikbalang relents to being the user's servant, basically "bucking bronco".

My version of the Tikbalang was to play on giving it long limbs and adding tribal symbols that are crude representations of the Tagalog alphabet as tribal paint and if it resembles someone, I did use my version of the Jersey Devil to make aspects of the Tikbalang, such as the hoof hands and hair, but in my universal idea, the Jersey Devil is a Tikbalang that has lost touch with its nature source and thus, grew corrupted and violent from being deprived of its home of power. So, this version is essentially a healthy form of the Tikbalang. I used references of my Jersey Devil, other Tikbalang art, and the Faun from Pan's Labyrinth as my sources.