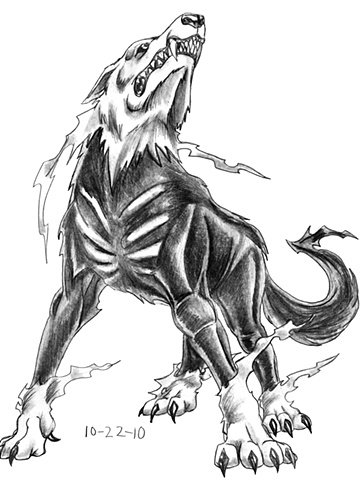 The Varcolac is described a wolf demon capable of consuming the moon and the sun, ala Fenris, the Norse wolf demon. It is also described as a wizard capable of transforming into a wolf. The name means "Werewolf" , occasionally "goblin"and in Slavic, means "Wolf's Fur". Some interesting rules involving the varcolac are that it requires a lot of people spinning thread to keep it in line, like Fenris,but save that the Varcolac fastens itself to these people as it reaches the moon to cover it in blood and their power lasts as long as the thread is not broken, otherwise it goes to another part of the sky. Said to be capable of expelling spirits out of their mouths, for which if the main body is moved, then the spirits will die as they will not be able to find the host body.

To make my version of the Varcolac, I kept it as, essentially, a giant wolf spirit. Like my version of the Strigoi, I made the Varcolac a massive amalgamation of various werewolf spirits from a mass grave or collection of spirits. I kept its form more attune to a wolf while keeping some ethereal wisps on key parts of its body, like the feet and head, while shading to give a subtle, or obvious, display of its ribcage. The pose I referenced from an excellent painting of the Norse wolf beast that I've mentioned repeatedly, Fenris. Or Fenrir, if you want to get technical