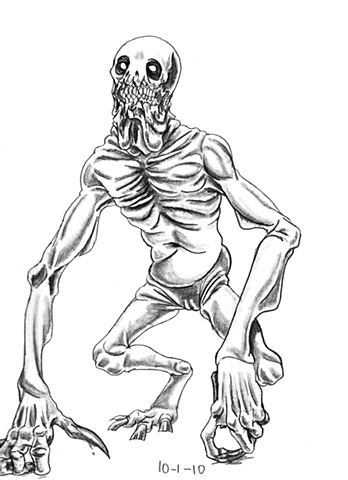 A manitou spirit of the Algonquian natives that is a manevolent, cannibalistic spirit that invades and possesses individuals, thus transforming them into Wendigos. When transformed, the Wendigo embarks on a Sisyphean quest to hunt and consume human flesh. This creature is associated with the cold, famine, and starvation. The scary part about the Wendigo is that since its a spirit that inhabits human hosts, its difficult to kill or defeat it, as destroying one merely makes the spirit pass over and possess the next individual.

The creature's initial description describes it at the height of emaciation. A skeletal appearance with sunken eyes and a mouth tattered and bloody, with a stench of death. This creature was a cautionary tale on the topic of cannibalism (people who ate human flesh were most at risk) and later; against greed and gluttony. This creature has recently become a staple in the horror genre; akin to vampires and werewolves, bearing little to its initial basis.

There is also a real world phenomenon called "Wendigo psychosis", which is a cultural phenomenon where individuals suffer an incessant desire to consume human flesh, even though there are food items readily available, often based on a prior case of famine and/or cannibalism.

My version is based on the Guy Davis depiction from BPRD and the Pale Man from Pan's Labyrinth. Emphasis was given to the dessication and the sunken eyes. I also gave it a torn apart mouth, to show more of its teeth, and made the claws appear as if they burst out of the person's hands, while the feet possess mainly elongated nails. This is relentless Eater of man, and I feel confident I reflected that in this drawing.