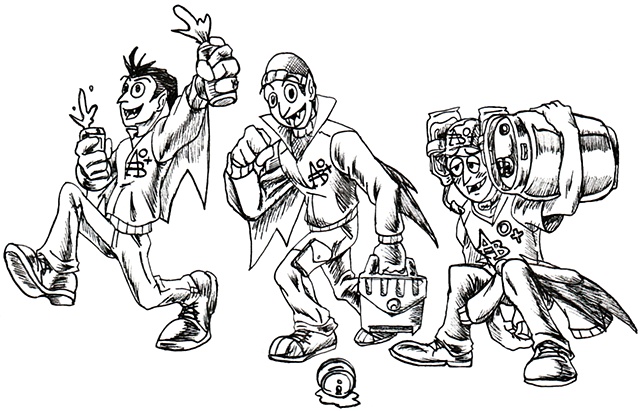 The Drunken Frat Vampires is the one gang of vampires that you can and can not freely work with. The positives is that they are band of vampires who show a strong sense of brotherhood, provide luxury assistance to all pledges, services to the community, and know how to throw an awesome party. However, they are also endlessy drunk, relentless in their hazing, and though united, will also make things worse together. So, do not, under any circumstances, work on a quest with the Drunken Frat Vampires, as you quest grade will drop significantly, and your loot will dry up faster than a Grassy Knoll drinking by the pond.

This one was another idea that I had to sit on until I came up with an adequate representation for them. With jackets that have the vampire cape and collar combo, the fraternity symbol of AB O positive, to the drunken celebration and revelry portrayed on each vampire. I hope I have nailed it, even if its just a stereotypical depiction of college frats.